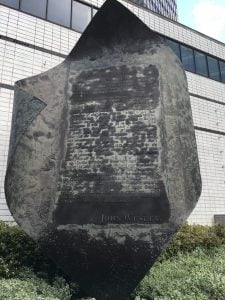 The Aldersgate Flame whose legibility and purpose had been lost

The Antique Bronze team recently undertook monument restoration work on The Aldersgate Flame.  This is a special bronze located outside the entrance to the Museum of London. It is reputed to be the approximate location of John Wesley’s evangelical conversion in 1738. The English cleric and theologian went on to be one of the founding fathers of Methodism. He inspired its followers to right wrongs of the day, particularly with regard to social issues, such as prison reform and the abolition of slavery.

The mighty sculptural scroll features text from Wesley’s journal describing his conversion experience. Over time, the environment had done its worst and the monument’s surface had corroded quite comprehensively. Only small patches of patina were left intact.

In a situation like this monument restoration is the only way to proceed.

Text was disfigured by corrosion

As the design of the sculpture centres around its text, visitors looked confused when guided there. They could no longer understand the statement that was intended to engage the public or appreciate its value because of the poor legibility and disfiguration of the surface.   This is where champion of the monument, Alison Gowman, came to its rescue. She found funds to restore the monument.

When a bronze surface is highly disfigured, a conservator has very few options open to them. Repatination involves the recolouring of a bronze’s surface by hand. The method employs almost identical methods to how a foundry would have finished the bronze when it was first made. This was a method that in previous eras was used so often that it was barely questioned.  Today,  we try to avoid treatments that do away with the passage of time in order to balance the original finish with acknowledgement of the object’s history.

Repatination, though, should make conservators pause. It goes against several principles that we try to uphold such as the desirability of techniques to be reversible and minimal intervention whenever possible.

Though technology has stormed ahead in the last decade, the repertoire of restoration technique suitable for large bronzes remains in the dark ages. Monuments which are hammered with rain, baked in the full sun and blown about by fierce urban winds often need repatination work in order to restore them to usefulness.  So in this particular case, legibility trumps reversibility.

We were fortunate to have some segments of patina that were not ruined. This meant we were able to coax the new colour into existence and blend it with the segments that were already intact.

Text on the scroll after some repatination work

All Is Well Now

All is well now for The Aldersgate Flame and it is being enjoyed again by its visitors.  Recently, Wesley Day was celebrated and the monument received a great deal of praise. Repatination should not necessarily be a technique conservators are fearful of using.  Considered carefully and used sparingly, it continues to be a necessary technique in the preservation of outdoor sculpture.

The Aldersgate Flame after Restoration

Read The Best-Selling Novel, A Rarer Gift Than Gold For FREE

Girl In A Golden Cage – Art and The Illuminati, Who Can Resist?